1
Literakid, LLC
Learn French and Spanish Online or in a Classroom
1

Literakid, LLC (203) 241-1522
Governor Malloy Visits
Sylvie Lobsenz's Pre-K Spanish Class at the Susanna Wesley School
French Classes for Young Children ‘Une Bonne Idee!’: Pequot Library offers program for three- to five-year-olds
(Posted to Fairfield.Patch.com 1/3/2011) By Mike Lauterborn
Southport, CT – Like sponges, they absorbed the words that were, before, foreign to them and repeated them back as if they were natural Francophiles.
The students were local three- to five-year-olds enrolled in a unique French language instruction program that is now in its second year at Pequot Library, 720 Pequot Ave. in Southport. January 3 marked the first class of eight half-hour afternoon sessions that will be offered between now and March 7. The program is fee-based, with the overall eight classes tagged at $80.
The program’s instructor is Sylvie Lobsenz, a native French speaker who came to the United States from southern France 17 years ago. The Fairfield resident has been teaching these classes in the area for the last eight years through her business Literakid.
“I started this when my son, who is now 12, was four, when I realized that there were no academic-based programs for language in the area,” said Lobsenz. “Kids aren’t really reading or writing yet, so the program is very visual and hands-on. We do a lot of games and songs.”
Lobsenz will offer a similar Spanish class for the same age group through Fairfield Public Library, beginning in February. The four-class structure will provide a basic view of the language. She is also offering after-school French and Spanish instruction for K – 5th grade in Fairfield elementary schools, with an initial kick-off at Roger Sherman Elementary on Jan. 4.
As promoted, the Pequot program is designed to provide fun language-learning using immersion games, visual aids, songs, crafts and props. Young children are kept interested as they play, sing and learn.
“I think my classes are a good fit with the other library programs,” said Lobsenz. “It’s the right environment and the setting is appealing. The library has been very welcoming and open and ready to try. We started with one group and now I have returning students and the program is growing. We like to keep the classes small, though, so all can participate and have personal attention.”
Children’s Librarian Susan Ei is grateful for the program. “As a French speaker myself, I was really interested,” she said. “When my children were young, I couldn’t find an affordable French program. This is a good value at $10 a class and a perfect time for children to take in the melody of another language and learn the gestures and basics. Sylvie is very lively and entertaining… the children seem very engaged.”
As Ei spoke, Lobsenz pointed the small group to a color chart and, with a music accompaniment, taught them the names of each color. Appropriately enough, she also taught them the phrase “Bonne Annee” (happy new year) and guided them on decorating a simple new year greeting card consisting of a folded sheet of paper with illustrations and words to the song “Vive Le Vent”. The children sat around a round table coloring the card and applying stickers while Lobsenz taught them the French words for the illustrated images and introduced other simple phrases like “merci” (thank you) and “je m’appelle” (my name is).
“This is a good class!” exclaimed 3-year-old Jack Bigham from Stamford, who was attending with mom Beth and sister Madelyn, 4.
“I thought this was a great way for the kids to be exposed to the language versus my feeble attempts,” said Bigham. “They get a richer experience, particularly with a native speaker.”
Mom Josette Cuda, from Fairfield, who had enrolled her 3-year-old daughter Zela, said, “I wanted her to experience other cultures and get a rich sense of language and I couldn’t think of a more beautiful language than French.”
“Fantastique!” said Lobsenz, surveying the children’s work before launching into “Au Revoir Mes Amis” and bidding the class ‘adieu’ with a dinosaur puppet.
For more information about the program, contact Pequot Library at 259-0346, ext. 18. 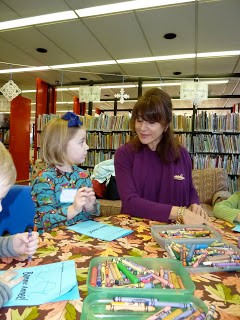 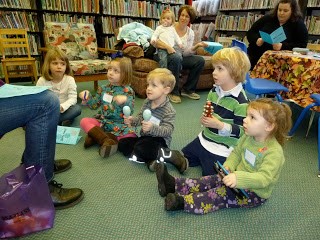 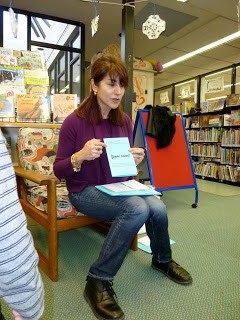